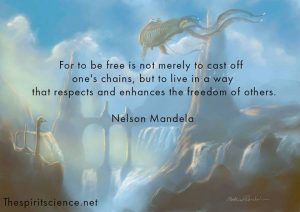 Americans are constantly told by the media that we live in the freest country in the world. But  is that really true, how often has it been true and in what areas is it or is it not true?  Why are people in  many other countries told the same or similar things by their governments and research  shows that while America does very well in certain categories to be sure (such as most expensive/sophisticated/dominant military, biggest entertainment influence on the planet, but on the more positive side being the biggest sender and funder of  missionaries to other countries), many other countries have areas that they are best in as well. South Korea for example followed Bible economics very diligently for a long time and ranks #1 or close to it in dozens of areas as I have shown here). What about talks like this one in a popular series where a news anchor eloquently says that American used to be great (and free), but isn’t anymore. How much truth is there to this:

Why America is NOT the greatest country in the world, anymore.  https://www.youtube.com/watch?v=VMqcLUqYqrs
What is freedom in the first place? Is there one kind of freedom or many types? How many types of freedom are there and how free are we…really?  We will begin to discuss this on this page (and see many other articles under the freedom heading on the menu).

First off, there are many kinds of freedom, some listed below (and another page will be coming soon listing many categories of freedom***). But they all fit into 2 basic categories:

NEGATIVE FREEDOM: This is the type of freedom that wants no restraints on our desires, emotions, wants and desires. It is the freedom to do what you feel like without concern for morals, values or the welfare of others. Sometimes our emotions and desires can be positive, good and moral. But sometimes they aren’t. Negative freedom is basically following whatever you want to do without restraint and without caring about its long term effect on you or others. This kind of freedom is exemplified best in the “Do What Thou Wilt” philosophy that is the core essence of Satanism.

Negative “freedom” is the origin of all the suffering, abuse, addictions, broken relationships, violence, crime, terrorism and war that exists in the world today.

The Bible warns about this negative “freedom” many times.

POSITIVE FREEDOM:  Positive freedom is making wise choices that will enable and empower you and people around you to have the highest levels of success in all areas of life, with God, in relationships with people, in health, in happiness, in wealth, in influence and so on.

The Bible talks about this kind of freedom as originating from loving and following God’s laws.

A couple introduction questions on freedom would be these:

When Princeton studies show that the same basic policies that favor the elite rich and powerful are followed regardless of whether a republican or democrat is elected (with a few superficial differences) and your participation in democracy amounts to a few minutes every 4 years, exactly what freedom to influence government policies and what they require you to do [such as how much tax to pay or whether they allow banks to charge interest or the rich to have many loopholes or to authorize teaching materialism and Darwinism in schools or more], do you really have?

When both parties eliminate millions of votes of people they don’t like using various tactics as Glen Palast has shown in “The Best Democracy Money Can Buy”, exactly what political freedom is it that you think we have?  See a short summary here:

Hidden purging of millions of voters

***The political problems above come directly from high concentrations of wealth. High levels of economic concentrations are allowing unprecedented levels of political control where a few elite and corporations control most of the world.  Fewer than 1,000 people control ~42,000 transnational corporations that are eating up the vast majority of the world’s wealth.
James B. Glattfelder: Who controls the world? | TED Talk – TED.com
https://www.ted.com/talks/james_b_glattfelder_who_controls_the_world
https://www.forbes.com/sites/bruceupbin/2011/10/22/the-147-companies-that-control-everything/
https://arxiv.org/PS_cache/arxiv/pdf/1107/1107.5728v2.pdf

***Worldwide US Military Bases Are The Real American Empire by John Pilger (Pilger is a war correspondent with decades of experience and in this very short 2 minute clip shows how America has become an empire with a greater reach than any empire in history. It now has an empire with at least 4,000 known bases in the US and  ~1,000 known bases overseas.)

How much freedom is there in the world when wealthy countries siphon off at least 2 trillion dollars a year from poor countries?
https://www.one.org/international/blog/trillion-dollar-scandal-the-biggest-heist-youve-never-heard-of/ https://www.theguardian.com/global-development-professionals-network/2017/jan/14/aid-in-reverse-how-poor-countries-develop-rich-countries
http://www.gfintegrity.org/press-release/new-report-on-unrecorded-capital-flight-finds-developing-countries-are-net-creditors-to-the-rest-of-the-world/

When many innocent people go to jail, esp. among the poor and minorities and bankers who crash the economy and cause millions of people to lose their homes go scot free, what kind of freedom in the courts of justice is it that you think we have?

When education is supposed to educate people to distinguish between truth and error (as Martin Luther King Jr. said), but public education (and some Christian education) almost completely fails at this basic task and instead has become what even government studies like “Nation at Risk” have said would be considered an act of war on young people if imposed on us by other countries, exactly what kind of educational freedom is there?

Why Public Schools and the Mainstream Media Dumb Us Down https://www.youtube.com/watch?v=6CDaflxJJ0g&feature=share

When millions of people are forced off of their lands and forced into debt where they lose their homes by economic crashes that even Milton Friedman and Alan Greenspan have acknowledged happened because of Federal Reserve policies (from the 1929 to 2008), what kind of freedom to own your own home is there?

http://www.ncpathinktank.org/sub/dpd/index.php?Article_ID=25643
Milton Friedman on the true cause of the Great Depression https://www.youtube.com/watch?v=cHhe5migMzM

When most of the population is in debt for most of their lives (~$100,000 debt on average for most families, as well as government debt, student debt, and many other debts) and the Bible tells us that debt is slavery (Prov. 22:7), and one of the biggest goals of oppressors throughout history has been to try to plunge people into debt so they could strip people of their assets, exactly what kind of financial freedom is it that you think you have (esp. when the Bible repeatedly says that God gave people a right to their own homes/garden and limited taxes to 1-2% and the rejection of this law causes families to lose tens of thousands of dollars per year)?
http://money.com/money/5233033/average-debt-every-age/ https://www.usatoday.com/story/money/personalfinance/2017/11/18/a-foolish-take-heres-how-much-debt-the-average-us-household-owes/107651700/
http://blog.truth-is-life.org/rights/thrive/land-rights-most-crucial-for-freedom/

When families lose ~$17,000 per year to plutocrats every year (not even considering Biblical economics and land rights above), how much freedom exactly do they have?
How 90% of American Households Lost an Average of $17,000 in Wealth to the Plutocrats in 2016 https://www.filmsforaction.org/articles/how-90-of-american-households-lost-an-average-of-17000-in-wealth-to-the-plutocrats-in-2016/
When marriages and families are broken apart due to financial problems caused by bank and government policies, and fathers and mothers are sent in opposite directions by work exactly how many families have real freedom to enjoy much genuine time with each other in building stronger relationships?
https://www.independent.co.uk/news/business/news/money-marriage-end-divorce-day-relationships-personal-finances-slater-gordon-a8147921.html
https://www.cnbc.com/2015/02/04/money-is-the-leading-cause-of-stress-in-relationships.html

When people (or their ancestors) have been forced off their lands or lost their homes due to unjust economic policies and are forced to work for corporations to pay basic expenses, and when 85% hate their jobs, how free are they really? And how free are they when they do not realize that by Bible definition as well as according to wise people in Rome as well as republicans and leading US newspapers in the 1800s when you have to sell your labor to others to survive, that is called wage slavery? In Bible times as Dr. Wane Grudem points out, a doulos or slave, was anyone who had to work for others and it included teachers, foremen, shop managers, physicians, etc. and was very similar to boss/worker relationships in companies today.

When broken families cause young people to have far higher incidences of addictions, which then just profit the corporations more, exactly what kind of freedom to live a decent and happy life with healthy relationships do most people have?
http://www.filmsforaction.org/watch/what-is-addiction-gabor-mate/ https://www.ted.com/talks/johann_hari_everything_you_think_you_know_about_addiction_is_wrong?language=en
When atheism makes people think that religion is the cause of most evils and makes them ignorant that greed and lust for power and control is the real cause of all evils (such as in the above cases and many others) and teaches no principles of finding truth or educating people with morals, how can it be anything but a tool of the elite that makes people easy to exploit and to harm or destroy freedom?
https://www.counterpunch.org/2016/01/29/new-atheism-worse-than-you-think/

When only ~4-10% of Americans have a biblical worldview (according to BARNA), exactly what kind of spiritual freedom are they going to have?
References are here:
http://blog.truth-is-life.org/rights/jubilee-economics/
Steve Biko, a South African dissident once said, “The greatest weapon of the oppressor is the mind of the oppressed.”

If we think we are free, when really we are oppressed, we will be blind and unable to see our real condition, similar to how the Bible describes those who think they are ***but are really naked and poor.

When 5 corporations control 90% of what you hear and drastically minimize or eliminate knowledge of some of the most crucial topics and issues, exactly what kind of freedom of speech and the press is it that you think you have?
https://www.rt.com/op-ed/158920-us-ukraine-media-control/  https://www.businessinsider.com/these-6-corporations-control-90-of-the-media-in-america-2012-6